Michael J. Malone has been involved in the development of real estate since the early 1980’s. Today, operating under Hunters Capital LLC, Malone is known for his focus on historic preservation and quality development in Seattle’s Pike/Pine Neighborhood.

Mr. Malone was Chairman of DMX Music, formerly AEI Music Network Inc., a company he founded in 1971. He built AEI Music into a leading multi-national music programming and distribution company with operations in 38 countries before selling to Liberty Media in 2001. Malone maintains an active role at Liberty Media as a board member. He is a past recipient of the Ernst & Young Entrepreneur of the Year Award.

Always passionate about preserving Seattle’s historic architecture, Malone bought and renovated the Sorrento Hotel in 1981. Today, Malone has interest in several boutique hotels and restaurants on the West Coast.

Active in the community, Mr. Malone is past chairman and lifetime member of the University of Washington TYEE Board of Advisors, as well as a Trustee on the University of Washington Foundation. In 1990 Mr. Malone served as the City of Seattle’s Arts Commissioner and has also served as the City’s Commissioner to the Seattle Center. Currently, Mr. Malone serves on the Seattle Police Foundation as one of the Founding members and past Chairman. Additionally, he serves on the National Council of the National Trust for Historic Preservation, the Northwest African American Museum Board of Directors, as well as the Capitol Hill Housing Board of Directors.

Born and raised in Seattle, Mr. Malone graduated from the University of Washington. Along with his wife, Barbara and four daughters, Mr. Malone finds time to enjoy racing vintage cars, fly fishing, tennis, skiing, and spending time at his rural ranch in Eastern Washington.

Before joining Hunters Capital in 2013, Sandy worked with Fortune 500 companies as well as start-ups and maturing firms. She attended the University of Southern California and worked for PriceWaterhouse Coopers in Los Angeles for nine years where she specialized in the oil and gas, food manufacturing, and insurance industries. A native of Seattle, she returned to the Northwest to help manage her family-owned real estate business.

Sandy has also been a Board member of Providence Hospice of Seattle Foundation for the past three years and personal experience with their services further fueled her commitment to the organization. She currently serves as the Board President.

Sandy is an avid skier, tennis player, and cyclist. She loves a good challenge: in 2015, following an 11-year hiatus after a biking accident, she got back on her bike and completed the California Coastal Classic, a 525-mile, 8-day ride from San Francisco to Los Angeles. She continues to ride regularly in Seattle, the San Juan Islands, and points beyond. 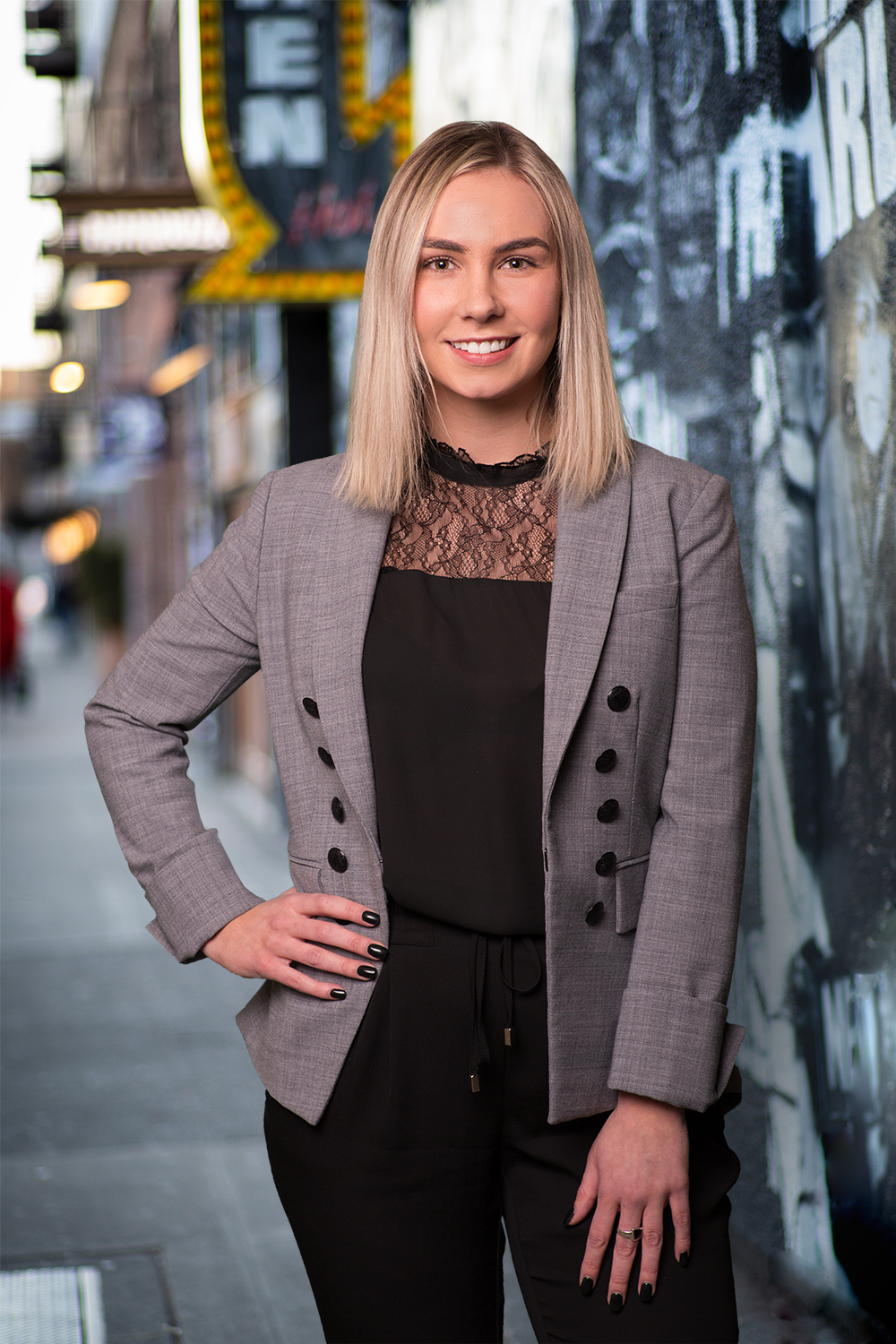 Olivia supports her team members through a variety of general administrative and accounting duties. She earned her Bachelor’s Degree in Communications from the University of Washington (go dawgs!) and is a member of the Kappa Alpha Theta sorority.

Originally from Laguna Beach, Olivia often travels home to visit her family and revel in the California sun. Still new to Seattle, she and her friends enjoy exploring Seattle’s urban and natural amenities. A workout lover, Olivia can be found regularly attending Barre3, FlyWheel, Pilates, and other sweat-inducing classes. She’s also caught the travel bug and is eager to continue exploring the U.S. and abroad.

Jill Cronauer is the Chief Operating Officer and designated broker for Hunters Capital. She is responsible for property acquisitions, marketing, leasing, public relations and overall business operations. Since joining the Hunters Capital team in 2008, Jill has grown Hunters’ managed square footage from 160,000 to nearly 600,000 square feet in Seattle’s Capitol Hill and First Hill neighborhoods. She is an active emissary in local community affairs for Hunters Capital: she served as President and Chairperson of the Capitol Hill Chamber of Commerce and is a board member for Capitol Hill Housing.

A graduate from Gonzaga University, Jill comes from a family of entrepreneurs with a history in commercial real estate in Washington and Alberta, Canada. Jill, her husband Ben and their children Henry and Cora live in the Arboretum neighborhood of Seattle. They enjoy spending time with family in the San Juan Islands and Hood Canal.

Seattle grown, Nicholas is a University of Washington graduate with a background in Economics and Urban Design and Planning. He is a passionate advocate for fostering Seattle’s urban environment. Currently, he has returned to the University of Washington and is pursuing concurrent dual Master degrees in Urban Planning and Real Estate. At Hunters Capital, Nicholas focuses on special projects and sorting through the myriad of upzones, rezones, and Mandatory Housing Affordability requirements outlined by the Housing Affordability and Livability Agenda (HALA).

Nicholas is an avid skier and occasional ski racer (slalom and giant slalom), though he breaks no speed records. When not skiing, he can be found travelling, hiking, and documenting Seattle’s changing urban landscape.

Erin Espinosa joined Hunters Capital in 2010 as the Office Manager and Executive Assistant to the Chairman. Currently, as the Operational Accountant, Erin works directly with the CFO, COO, Controller, and Property Managers to maintain budgets and manage the portfolio’s bank accounts, which include reviewing and facilitating all cash transfers.

As a graduate of the University of Washington with a degree in Sociology and an alumna of alpha Kappa Delta Phi sorority, Erin continues her passion for volunteering by serving on both the Seattle Works Board of Directors, a volunteer organization that connects volunteers with different community issues at various organizations, and the board of the Cal Anderson Park Alliance.

Erin is not only a big fan of local sports teams like the Huskies, Mariners, and Seahawks, she also brings her leadership skills and passion for community to Hunters Capital, furthering the company’s mission to steward the growth and vitalization of Capitol Hill’s diverse communities.

Originally from the Philippines, Gemma earned her BS in Accountancy at the Philippine School of Business Administration in Quezon City, Philippines. She also recently graduated with honors from Highline College, earning an AAS in Accounting. Gemma has over ten years of accounting experience with both non-profit and for-profit organizations. She most recently was a consultant with Robert Half Finance & Accounting, assigned to the Renton Housing Authority and Seattle Foundation. Gemma volunteers with the United Way of King County-VITA program, helping taxpayers enhance their federal tax returns. She is dedicated to her job and her main focus is to provide accurate accounting information to her fellow colleagues.

Gemma is an avid tennis player; she actively competes in USTA leagues across the Pacific Northwest. She also loves hiking, camping, and exploring the astounding natural beauty surrounding Seattle. Her recently acquired interest in botany inspired her to adopt abandoned orchids, which she proudly displays at work and home.

Lindsey joined the team in 2019 after spending seven years at Noble House Hotels & Resorts. She is a highly skilled accounting and finance professional with a wide range of experience from public accounting to management. Lindsey works directly under Sandy, helping to mentor and develop the Accounting staff.

A Seattle native, Lindsey is an avid Seahawks fan. She also loves kite boarding, snowboarding, surfing, and volleyball. She is never one to back down from a challenge, whether professional or sports related and travels the world to pursue her passions.

Lindsey is a graduate of Washington State University, where she obtained her BA in Business Administration and Masters in Accounting. Speaking to her strengths, she successfully navigated the interview process with graduates of the University of Washington, Gonzaga and USC.

A Seattle native, Michael began his career in construction at an early age, starting with the residential construction company owned and operated by his family. Working his way into the commercial construction world, Michael joined the Schuchart Corporation as a project manager.

In 2003, Michael founded Blueline Development LLC, followed by his 2004 co-founding of Lakeview Development LLC. From 2003 to 2006 the companies developed several single-family homes and a multi-family building located on north Capitol Hill. In 2007, Michael joined Hunters Capital. He has since managed multiple projects, including the recently constructed Dunn Motors Building. Under his tenure, the company’s portfolio from has expanded from 90,000 to over 600,000 square feet.

Michael and his wife Kieran have three children (Beau, Estelle and Olive) who keep things very active at home. His family loves anything UW-related, spending time out on the boat, and weekend getaways to Lake Roosevelt.

Kayla Stevens is a born and raised Washingtonian. She started her nearly decade-long real estate career in north Seattle, and most recently comes from Essex Property Trust where she specialized in multi-site property management. Kayla appreciates the entrepreneurial and nimble working environment that Hunters Capital offers.

When Kayla isn’t working, she enjoys spending time with her husband and baby son, Tango the dog, and Tank the cat. Her family loves to hike the Pacific Northwest’s many great trails. A foodie, Kayla enjoys hosting elaborate dinner parties for friends. In addition, as any good Seattleite does, she enjoys her daily cup(s) of coffee and trying the region’s many different roasteries.

Amy comes from the banking world where she worked for Chase Bank as a teller before moving up the ranks. She is dedicated to customer service and is proud of her impeccable time management skills.

Amy is bubbly, has great energy and is a Huskies fan. While Amy does not have prior property management experience, she does share the philosophy that housing is personal and that it is our job to give great service to our residents and provide a valuable living experience. Amy loves Capitol Hill, spending much of her free time here. She recently relocated to Seattle from Bonney Lake.

Carolann hales from a small town north of Seattle and spent much of her youth imagining life in the city. She is delighted now to both work and live on the Hill. Carolann jumped into the property management industry almost three years ago and loves it. She enjoys seeing people settle into their homes and strives to form long-lasting relationships with her residents.

In her free time, Carolann finds any excuse to take a ferry ride, travel to new and exciting places, or take long drives into Washington’s evergreen forests. She is also passionate about environmental sustainability and stewardship, and tries to incorporate it into her life as much as possible.

Simon ensures that each property’s environs are kept in immaculate condition. He loves his job and finds the work not only interesting, but also rewarding.

Originally from Guatemala, Simon settled in Seattle four years ago. He and his wife have a beautiful baby boy. He enjoys swimming and showing off his soccer moves. In his spare time, he takes his family hiking and camping around the Northwest.

Chris Hearne is part of the Property Management Division Team. He supervises daily maintenance projects at both our commercial and residential buildings. He takes great pride in ensuring that all aspects of building operations are kept to a very high standard.

More than twenty years ago, Chris started his career as a groundskeeper for a property in Kirkland, WA. He then moved up to Maintenance Assistant at a property in Bellevue, WA. Over the years Chris has supervised the maintenance for many properties, including a 500-unit property in Mill Creek, WA, overseeing a maintenance crew of five people. The last residential property prior to working for Hunters Capital was located in Issaquah, WA. There he managed a team of four maintaining a 250-unit building.

On his off time, Chris enjoys photography, hiking, and the great outdoors of the Pacific Northwest.

Dustin and his wife recently relocated to Washington from Nevada, where they have lived for the past few years. Dustin’s experience lies in multi-family residential maintenance and he is passionate about customer service, along with all things maintenance. Working in the industry since 2015, Dustin is currently the lead technician and comes to us highly recommended by his colleagues.